In Who Among Us Really Knows? Sidney Tillim has a confident Clement Greenberg, the apologist of Abstract Art, striding into a resolutely figurative painting. There stand a puzzled Helen Frankenthaler and a musing college co-ed, along with some skeptical kids (including Sid, as the young boy in short pants “thinking things out”–or so the drawing for this figure is titled.)

“Sidney is the only person I knew who managed a long-term friendship with Clement Greenberg without becoming either a sycophant or an outcast.”

THE TILLIM ARCHIVE in the New York Public Library is a great storehouse of information that maps the New York art world in the second half of the twentieth century.

The literary, artistic, and personal archives of Sidney Tillim—painter and critic—provide an invaluable documentary resource for the study of post-war modernism. As do Delacroix’s journals onto the scene in nineteenth-century Paris, Tillim’s journals, plus art writings and drawings, provide an insider’s look onto the fractious and evolving art scene in New York in the decades following WWII.

Tillim was a painter who wrote about art as a contributing editor, initially, at the well-established Arts Magazine and later at the upstart Artforum. He was, according to the founding editor of Artforum, Philip Leider, “the only person I knew who managed a long-term relationship with Clement Greenberg without becoming either a sycophant or an outcast.” Tillim was a figurative painter who made his mark at the 1972 Whitney Annual with history paintings that were commentaries on the turbulent events of the 1960s and ‘70s. In the 1980s, however, Tillim abruptly (and to the permanent detriment of his exhibition career) abandoned narrative painting and turned to abstraction—only to return to figuration late in life. Throughout these decades Tillim taught art history at Bennington College, post-war America’s art school par excellence.

It is this multiplicity not only of insider platforms (painter, critic, teacher), but also of warring perspectives (status-quo vs avant-garde; representation vs abstraction; acclaim vs neglect) that positioned Tillim uniquely as he recorded and interpreted the fierce arguments between figurative and abstract artists.

Tillim’s large archive (113 boxes, 23 volumes) holds over fifty years of drawings, sketchbooks, journals (40 volumes), and correspondence, along with painting, exhibiting, and teaching records (including transcripts of Clement Greenberg’s Bennington seminars); published and unpublished works (Art After Ideology and The Return of Bad Art), manuscripts, typescripts, notebooks, photographs; an annotated personal library, as well as inventories of his book collections on photomechanical processes and on nineteenth-century American art, and personal items.

The archive, organized by the artist, is accompanied by a comprehensive inventory compiled by Diane Radycki Tillim. 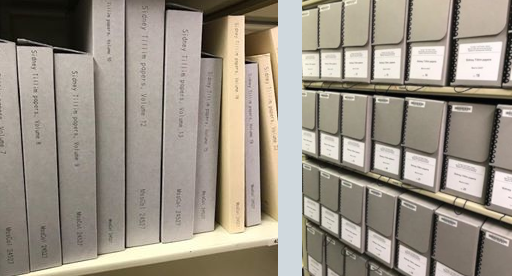 SIDNEY TILLIM (American, 1925–2001) was an artist and art critic. He is best known for his revival of history painting in the 1970s and was a much admired art critic (contributing editor at Artforum and Arts magazines).

Tillim began in the 1950’s an abstract painter and a “promising” poet (Lawrence Ferlinghetti, San Francisco Chronicle, 1953). There are also professional and exhibition records; published and unpublished manuscripts (“Art After Ideology” and “The Return of Bad Art”); teaching materials (including transcripts of Clement Greenberg’s Bennington seminars); as well as correspondence, an annotated personal library, memorabilia, etc.

As a painter, Tillim began in the 1950’s—a “promising” poet and abstract painter, declared the Beat poet Lawrence Ferlinghetti in the San Francisco Chronicle (1953). Regardless, toward the end of the decade he turned to representational and figure painting. “Consistently a contrarian but never an outsider,” was the judgment made on his long career in The New York Times (2001) by the art critic Ken Johnson.

In the 1960’s Tillim began working on large narrative pictures of personal, historical, and current events (The Death of Malcolm X, 1965, unfinished; Champion, 1966, Hirshhorn Museum; Count Zinzendorf Spared by the Indians, 1972; John Adams Accepts the Retainer to Defend the British Soldiers Accused in the Boston Massacre, 1974; The Capture of Patti Hearst, 1978, private collection). In retrospect it could be seen that Tillim was on the forefront of a trend back to realism and narrative which would grow throughout the 70’s and blossom in the 80’s. By then, however, he had returned to abstraction (Bugs Bunny Meets the Sublime, 1982). His representational work developed in the socially and politically unstable sixties and seventies; while his experiments in abstraction (imprinting with paint-soaked paper towels and drawing with Korectype), at the time conservatism took hold in the eighties and nineties (Diderot in Hawaii, 1988; Fast Shuffle, 1990). In the last three years of his life he returned to narrative painting and popular culture—television, movies, and current events (The Death of Irene Silverman, 2001, private collection—“a masterpiece” declared the painter Jules Olitski in The New York Times, 2001).

Tillim was also a brilliant, idiosyncratic critic. He was a contributing editor at Artforum from 1965 through 1970. Before that, he had been a contributing editor and prodigious reviewer at Arts magazine, 1959–1965. His last published article “The Academy, Postmodernism and the Education of the Artist” (1999) and his last exhibition review “William Henry Fox Talbot at H.P. Kraus” (2000) appeared in Art in America. Tillim considered the writings of Clement Greenberg to have been the most important influence on his own criticism. The subject of “Critical Realist: Katy Siegel on Sidney Tillim” (Artforum, Sept. 2003), Tillim is extensively interviewed in Challenging Art: ARTFORUM 1962–1974 by Amy Newman (Soho Press, 2000).

In addition, Tillim was an avid book collector and collected specimens of the photomechanical processes from c. 1840–1960. On this subject, he organized the exhibition The Work of Art in the Age of Mechanical Representation (Bennington College, 1992), and authored the 1996 exhibition catalogue Photographs in Ink (Farleigh Dickinson University). In 2000 his unique collection was acquired by the San Francisco Museum of Fine Arts.

Born in Brooklyn, Sidney Tillim grew up in Norfolk, Virginia, where at age thirteen he won the Tidewater Marble Championship. After serving three years in the Army in Europe in World War II, he attended Syracuse University on the G.I. Bill, earning a B.A. in art. In 1956 Tillim married Muriel Sharon (1919–1996), director of the Children’s Theatre at the YMHA, New York City; in 1998 he married the art historian Diane Radycki. From 1966 to 1993 Tillim taught at Bennington College. A recipient of an NEA grant (1974) and a Guggenheim Fellowship (1995), Tillim had twenty-two solo exhibitions during the course of his career and was included in over sixty group shows (among them, 22 Realists at the Whitney Museum in 1970 and Contemporary American Realism Since 1960 at the Pennsylvania Academy of Fine Arts in 1981). His last solo show took place at Trans Hudson Gallery in Chelsea, five months before his death, in August 2001.

Tillim’s works are in a number of public collections, including The Hirshhorn Museum, Washington, D.C., the Ludwig Collection in the Modern Museum of Art, Vienna, The Michner Collection at the University of Texas, and the Museum of Modern Art, New York, among others.